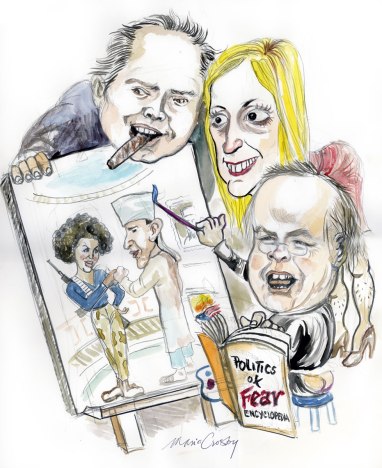 Fear is profitable. After all, what better way to oil the gears of the military-industrial complex and accumulate wealth than with a frightening slogan?  Better yet, have it be a frightening slogan that portrays those that disagree as weak and worthy of scorn. In Western society, it has become more and more prevalent, since the economic crisis of ’08, to portray minorities as scapegoats.

Generally speaking, the historical precedent is one that sadly works similarly every time. During recessionary periods, fingers are pointed. Groups are targeted. And it happens because it is convenient. It is easy. It is easy to characterize the “Other” in society as vile for political gains, since they lack the social power to fight back. As the majority in the society scramble to reclaim all they have lost economically, they begin to find solace in blaming others rather than the system that produced it. This same phenomenon has reproduced itself not only the United States, but in virtually every Western society since the Great Recession of 2008.

In Europe, the crises of debt and unemployment has allowed for a frightening increase in nationalism. Nostalgia for fascism in Greece finds its face in the Golden Dawn party. Xenophobia voices are vulgarly heard through France’s third largest party, National Front, and through Germany’s National Democratic Party. In Hungary, the Jobbik party has risen to become the third largest party through Hungarian irredentism and anti-Semitism. Even in the United States, minorities are denigrated as being “moochers” as the right insists on tighter immigration regulations and cuts to social safety nets. If the economy is of greatest importance, then why do we keep allowing racist “culture wars” to dominate politics? At the most critical point, when people have everything to lose and nothing to gain, the individuals with actual solutions begin to scramble and watch as people repeatedly choose nationalist strongmen over economic sustenance.

The problem lies in ideology. Westerners are very coddled and institutionalized in a way that makes them coalesce to authoritarian power. A right-wing deviation from the normal political speak is not all that much of a radical bent compared to left-wing calls for economic fairness and institutional overhauls. For one, Western people take pride in their judicial system and police force, claiming it to be symbolic of genuine integrity. In the United States, the military is always superimposed with patriotism and honor — and going against the grain is seen as foolishly “un-American.” The institutions that uphold these spheres of power craft in the population a feeling of trust. This trust is easily mended and oftentimes exploited. And all of this is strengthened and solidified through rhetoric. Contradictory slogans equating militarism with freedom is commonplace, at least in American politics. Naturally, this is used as political bait; if you attack the militarization of the world through American power, you must despise democracy and liberty despite it being anything but. The cognitive dissonance is so blatant, but yet it goes uncontested in the American mind and it serves to fester right-wing politics. Western politics has a predisposition to be right-wing politics.