In 1850, classical liberal theoretician Frédéric Bastiat published his landmark essay That Which Is Seen and That Which Is Unseen (Ce qu’on voit et ce qu’on ne voit pas). In it, he introduces his acclaimed scenario — the “parable of the broken window.” The story is a simple one: a shopkeeper’s son accidentally breaks a pane of glass and hire a glazier. And so it goes:

Suppose it cost six francs to repair the damage, and you say that the accident brings six francs to the glazier’s trade – that it encourages that trade to the amount of six francs – I grant it; I have not a word to say against it; you reason justly. The glazier comes, performs his task, receives his six francs, rubs his hands, and, in his heart, blesses the careless child.

But what if windows continue to be broken purposefully; what if the child is, by some oddity, conspiring with the glazier to reap the benefit of profit? In short, “destruction is not profit.” The issue of destruction, and its subsequent fixing, is that of which creates no real value. It merely moves moves money from one hand to another (in this case, from the shopkeeper to the glazier).

The opportunity cost of such an action, the repeated breaking of windows, is at the expense of other actions that could add more net benefit to the town. For one, the glacier may be distracted from other necessary tasks by fixing the shopkeeper’s window repeatedly, acting as a negative constraint on his labor, or the shopkeeper might have rather used the money spent on repairs on either investment or consumption. It best can be summed by Bastiat’s phrase: “society loses the value of things which are uselessly destroyed.”

What will you say, disciples of good M. F. Chamans [French politician], who has calculated with so much precision how much trade would gain by the burning of Paris, from the number of houses it would be necessary to rebuild?

Bastiat goes on to use his argument against protectionism (one which the Austrian school of thought uses often), which is, I feel, an incorrect application of the actual parable. Bastiat was functioning within the French colonial economy and he failed to address the difficulty of smaller firms lacking the economies of scale to compete with already-established firms. This is demonstrated by the Hamiltonian “infant industry argument,” and the adoption of protectionism in the United States, allowed for the development of American industry that would have been eaten up by British competitors had they not been protected. However, this is a separate issue entirely — Bastiat’s parable can be properly applied to the opportunity cost of war and those that claim it “brings growth.” Naturally, he actually applied his thinking to the “war economy” and wrote directly of it. He differentiates between what is “seen” and costs that are “not seen.”

But, a hundred millions taken from the pockets of the tax-payers, cease to maintain these taxpayers and the purveyors, as far as a hundred millions reach. This is that which is not seen. Now make your calculations. Cast up, and tell me what profit there is for the masses?

Therefore, a war-driven economy does not actually create sustained growth since it takes away necessary labor by enlisting them and deviates capital to military use rather than civilian use.

The Post-WW2 era brought with it a period of unprecedented economy growth. The process of rebuilding Europe was relatively quick and economies sprang back on their feet. Called the “Golden Age of Capitalism,” Western European nations experienced GDP growth rates never seen before in their history and some of the lowest unemployment rates ever recorded. To many, it appeared to be the triumph of capitalism in rebounding from the previous years of carnage and war. Titles were given for each nation’s “recovery miracle” — Wirtschaftswunder in Germany, the Trente Glorieuses in France, and others. However, when placed in context, it was a development consist with capitalism’s short but sporadic history.

The GDP during the war differed tremendously year by year. The UK economy began feeling the economic consequences of the war after 1943, France after 1939, Italy after 1942, Germany after 1944, and Japan also after 1944. Europe had to be rebuilt — the broken window had to be fixed.

And after the war, the war-torn nations called upon their glaziers: industry. Production soared and is perhaps best demonstrated in automobile production alone, which rose drastically after 1946.

Military spending also increased as military armaments accumulated in the post-war period. In the years between 1950 to 1960, France doubled their military spending from 11 billion to 22 billion, West Germany from 0 to 22 billion, the United Kingdom from 23 to 29 billion, and the United States from 69 to 168 billion [1]. The need for a permanent armament reserve for potential war against the Soviet forces proved to be a constant in the Cold War economies that would arise in the years after World War 2. Likewise, this stirred production levels to meet these new demands. With the increases in production, fresh new labor was needed to sustain it. Luckily, many troops from the war provided such manpower necessary to sustain these new production levels. They were absorbed into the economy with relatively ease and Western Europe experienced unemployment levels that were at historical lows. Deputy Commissioner Robert J. Myers of the Bureau of Labor Statics writes in 1964:

However, the reason is quite clear — Europe had room to grow. After being devastated by war, its cities ravaged by bombings, it had to be rebuilt. Industry began to grow rapidly and profits accrued as large inflows of labor were coming into these nations from individuals that were once fighting in the front lines. The conditions were set and the growth was focused on repairs and war production with the help of the Marshall Plan put into effect by the United States. Thereby it can be said, had the war not occurred, GDP would be much higher in these Western nations since they would not forgo the opportunities that were missed in focusing on rebuilding repairs. Once again, Bastiat’s argument can be evoked —  “society loses the value of things which are uselessly destroyed.”

As was expected, the economic boom of the post-WW2 era would not last indefinitely. A conglomeration of issues arose with the advent of the 1970s: the end of the Breton Woods Agreement in 1971, the Oil Crisis of 1973, and the policies of liberalization that ensued. The crisis and murky economic future that followed can best be characterized by employing an analysis of the rate of profit of these Western powers. The fluctuations of the rate of profit can help us better understand the crises that set in and its ramifications in the years that followed. The rate of profit can be best explained by the following simple equation:

Whereas S is surplus value, C is constant capital, and V is variable capital. The surplus value can be thought of as undistributed profits, one which do not go towards the costs of the initial labor power and machinery needed to construct the commodity. The difference between constant capital and variable capital is relatively simple — constant capital is machinery, which is relatively constant in the short run, and variable capital is mainly manifested as fluctuating wages. This relationship is crucial because, in a capitalist economy, industrialists want to maximize efficiency in order to better compete. Consequently, the more commodities are produced, the more prices fall. This translates to capital rising and surplus value subsequently falling which causes, in the long run, a tendency of the rate of profit to fall. Granted, this is only a tendency, since there are counter measures to prevent such a phenomenon from occurring (as seen in the neoliberal years of the 1980s). 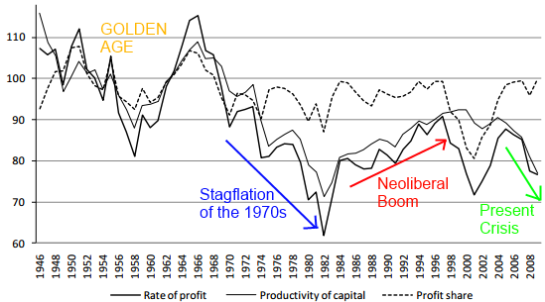 A crisis was inevitable after the post-WW2 boom since production had exhausted itself. The all-too-common crisis of overproduction soon followed, with the rate of profit dropping sharping starting from 1965 in conjunction with the rise of more radical movements in labor and demands for wage increases and better conditions. The fact that the rate of profit plummeted likely caused the economic malaise and stagflation of the 1970s. And the response was one we are too familiar with today — outsourcing. In order to increase profits, corporate bodies began to move to the Third World to lower their labor costs (variable capital) thus increasing their rate of profit. This is represented by the neoliberal boom of the 1980s with the rise of Reaganomics and Thatcherism 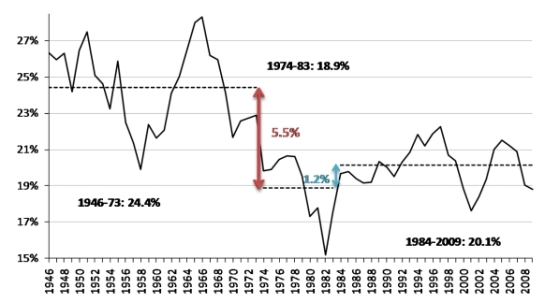 The Rate of profit in the United States; Source: The Spain-U.S Chamber of Commerce

Point being — what does this necessarily have to do with the supposed “Golden Age of Capitalism?” Many Keynesian economists point to their policies and argue they spurred the growth of the post-WW2 era. However, with Europe broken and demolished, their economies could only grow. Growth had to follow since so much capital was required to rebuild post-war Europe. As efficiency increased exponentially and production soared, it was safe to assume another crisis would soon follow, since the inherent contradiction of overproduction always brings with it economy calamity. And to curtail these decreasing rate of profits a new economic ideology was introduced — neoliberal doctrine, which worked to cut taxes, deregulate, and cut labor costs through Third World exploitation. The shaky footing that the “Golden Age” brought gave individuals blissful optimism, as they hoped that the policies instated would continue growth indefinitely, however they failed to curtail the inherent contradiction of the profit accrued and capital needed, which would evoke the crisis that would follow in the 1970s.

– Rate of profit graphs were obtained from Short and Long-Term Dynamics of the U.S Profit Rate in the Context of the Current Crisis

– The “Millennium Crisis” and the Profit Rate

– System Failure: The Falling Rate of Profit and Economic Crisis